Archbishop Dolan: "Love for Jesus and his church must be the passion of our lives." 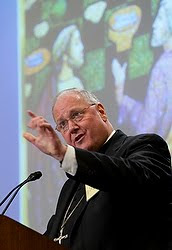 BALTIMORE (CNS) -- Archbishop Timothy M. Dolan of New York called on his fellow bishops Nov. 14 to communicate to the world that the sinfulness of the church's members is not "a reason to dismiss the church or her eternal truths, but to embrace her all the more."

In his first presidential address since election as president of the U.S. Conference of Catholic Bishops last November, Archbishop Dolan opened and closed with the words: "Love for Jesus and his church must be the passion of our lives."

Describing the church as a spiritual family that "to use the talk show vocabulary ... has some 'dysfunction,'" he said the bishops' "most pressing pastoral challenge today is to reclaim that truth, to restore the luster, the credibility, the beauty of the church."

But he cited "chilling statistics we cannot ignore" that "fewer and fewer of our beloved people -- to say nothing about those outside the household of the faith -- are convinced that Jesus and his church are one."

"So they drift from her, get mad at the church, grow lax, join another or just give it all up," Archbishop Dolan said. "If this does not cause us pastors to shudder, I do not know what will."

He also acknowledged the enthusiasm of "young people, new converts and recent arrivals" as well as "the wonderfully deep and radiant faith of Catholic immigrants who are still a most welcome -- while sadly harassed -- gift to the church and the land we love."

Shortly after he spoke, the USCCB issued a statement announcing that Archbishop Dolan had met privately with President Barack Obama at the White House Nov. 8.

The statement described the meeting as "very cordial" and said it "included discussion of pertinent moral concerns arising in foreign and domestic policy, issues of both agreement and disagreement."

"Both President Obama and Archbishop Dolan agreed that this was a private meeting, so no further details will be discussed," it added.

In his talk, the archbishop said "our world would often have us believe that culture is light years ahead of a languishing, moribund church."

But rather, "the church invites the world to a fresh original place, not a musty or outdated one," he said. "She dares the world ... to foster and protect the inviolable dignity of the human person and human life; ... to protect marriage and family; to embrace those suffering and struggling; to prefer service to selfishness; and never, ever to stifle the liberty to quench the deep-down thirst for the divine."

Archbishop Dolan urged the bishops to "resist the temptation to approach the church as merely a system of organizational energy and support that requires maintenance."

"The church we passionately love is hardly some cumbersome, outmoded club of sticklers, with a medieval bureaucracy, silly human rules on fancy letterhead, one more movement rife with squabbles, opinions and disagreement," he added.

"Our urgent task to reclaim 'love of Jesus and his church as the passion of our lives' summons us not into ourselves but to Our Lord," Archbishop Dolan said. "Jesus prefers prophets, not programs; saints, not solutions; conversion of hearts, not calls to action; prayer, not protests; 'Verbum Dei' rather than our verbiage."

But like Jesus on Calvary, the church has wounds, the archbishop said.

"Instead of running from them, or hiding them, or denying them, she may be best showing them, like he did that first Easter night," he said.

Read the text of Archbishop Dolan's inaugural address as president of the USCCB by clisking this link.
Photo: Archbishop Dolan addresses the bishops. (CNS//Nancy Phelan Wiechec)
Posted by MCITL at 8:16 AM