Third Sunday, Ordinary Time. "Repent": Accepting the gift of freedom which prepares the way for the new life of the Kingdom 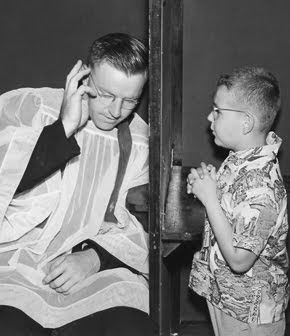 A woman called in to a Catholic question and answer radio show the other day and said she had been raised in Catholic schools where they were told that if someone ate meat on Friday and died without repenting they would go to hell. She then asked "what happened when the Church lifted the "ban" (love that word!)to all the people who ate meat on Friday, knew it was a sin and died without repenting? Did they all get out?"

It is the nature of hell that there are no "exits". So, one would have to answer "no" to this sympathetic intercession for the sake of the damned. Of all the things for which one would need to repent, however, I am guessing that eating meat on a Friday when abstention was gravely obligatory would be one of the easiest sins for which to repent. God's mercy is far beyond our understanding, and though He does respect the wishes of those who persist in rejecting Him to the end of their lives, He is sensitive to the faintest wisp of sorrow on the part of sinners and in Christ has poured out the infinite graces of redemption so that all may be saved and come to the knowledge of the Truth.

To read the full text of the Sunday homily, please visit Meeting Christ in the Liturgy by clicking here.
Posted by Father Kevin M Cusick at 7:24 AM