Pope Francis reveals his real mission: the destruction of doctrinal and liturgical continuity in the Catholic Church

I could write a post every day at the moment about the confusing and worrying statements and decisions the Pope is making.

According to this the Pope seems to be labouring under the misapprehension that 1974 is the future.

These sorts of comments are coming too thick and fast to document presently.

Tradiones custodes seems to have provided a kind of watershed moment in this papacy which cemented the curious yet constant attacks on "rigidity" and opened the flood gates allowing the Pope to reveal his real mission: the destruction of doctrinal and liturgical continuity in the Catholic Church.

At the beginning of September, in a radio interviewwith Spanish radio COPE the Pope made an an under reported comment relating to the discussions which took place between the cardinals before the conclave which elected him. Pope Francis explicitly confirmed that the current reform of the Church is part of an agenda that was programmed and decided before the 2013 election by a small group of cardinals.

“the reform is what the cardinals wanted from the conclave of March 2013,”

“I did not invent anything, my action since the beginning of the pontificate consists in achieving what we, the cardinals, had requested in the pre-conclave meetings for the future pope: ‘the next pope will have to do this, this and that. And that is what I have started to implement. I think there are still various things to be done, but there is no invention on my part: I obey what was decided at the time.”

The pope argues that some of those who supported his election, siding with the most obvious reformers, would not have accepted the full measure of the consequences of their commitment:

“perhaps some did not realize the significance of what they were saying, or did not imagine the consequences, as it is true that certain themes are disturbing. But there is no originality on my side in the plan implemented,”

The pontiff emphasises, stating clearly that the reform which is taking shape “sums up what we cardinals were saying at the time.”

If one had to define the line which presided over his election, Pope Francis sums it up with the exhortation Evangelii Gaudium, which “takes up what had been expressed by the cardinals.” In an SSPX News article about this radio interview, the society explain that this demonstrates the goal of the Francis Pontificate is to make the pastoral dimension prevail over everything else, and to send doctrine to the dungeons of the magisterium. 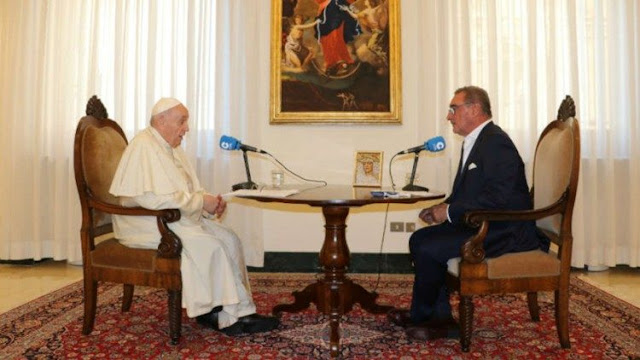 These quite brazen comments, when put with the previous reports of a small group of cardinals deliberately plotting to remove Pope Benedict XVI and replace him with a man who would deliver a progressive agenda adds to a growing body of evidence which completely contravenes the current rules on convening conclaves.

I can't help but feel unsurprised, as if we have learnt anything about Pope Francis, it's that he only cares about rules when they suit him and disregards them if they oppose him. The rules governing conclaves are laid out in section 81 of Universi Dominici Gregis:

81. The Cardinal electors shall further abstain from any form of pact, agreement, promise or other commitment of any kind which could oblige them to give or deny their vote to a person or persons. If this were in fact done, even under oath, I decree that such a commitment shall be null and void and that no one shall be bound to observe it; and I hereby impose the penalty of excommunication latae sententiae upon those who violate this prohibition. It is not my intention however to forbid, during the period in which the See is vacant, the exchange of views concerning the election.

Of course, this means very little unless someone is willing to do something about it and there doesn't seem to be any appetite for that. Pope Francis has been very open in promoting supporters (Grech, Cupich, Tobin, Zanchetta, Paglia, etc etc etc ad nauseam) in a brazenly political fashion and any opposition (eg, the dubia) is simply ignored, or dealt with (Pell, Müller, Sarah, etc).

What we can see is that despite the opacity of his words, the Pope has a clear agenda to break doctrine and liturgy and change Catholicism from something certain and practical into something vague and meaningless.