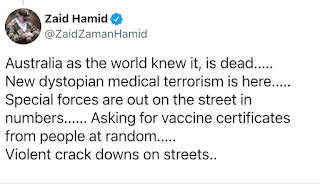 Australia Is Now a Fascist State

Cops are going door to door to demand citizens answer the question, "Have you ever attended a protest? Do you plan on attending any protests in the future?"

A trio of Australian police officers visited a man claiming they are doing "welfare checks" to ask residents if they plan on participating in the ongoing protests against COVID-19 mitigation efforts. The man in this video was asked if he has plans or if he knows anyone who has plans to protest and if he has participated in protests in the past.

"Have you gone to any protest in the past?" the policeman asked.

"No, I'm not going to answer that, you guys wouldn't be here otherwise," the man says.

"I'd like to know how you got this address, actually," the man told the police.

"Anything else you might want to tell us to help ensure the public safety?" an officer asked after a barrage of questions about his "plans."

"No, as long as you aren't going around shooting people with rubber bullets like in Victoria," the man said.

In New South Wales, Deputy Premier John Barilaro said that when the vaccination rate rises to 70%, most people will get their freedoms back.

Who will "lose their freedoms."

Unvaccinated NSW residents have been delivered a major blow, with officials confirming those in regional areas who haven't received the vaccine will have some of their new-found freedoms reversed within weeks.

Deputy Premier John Barilaro said the 70 per cent roadmap, which is due to kick in on October 11, will apply to the whole state.

This means unvaccinated people living in areas that aren't currently in lockdown will no longer be able to enjoy the same freedoms they have in recent weeks.

"So there will be individuals in regional and rural NSW who choose not to be vaccinated who will lose their freedoms on October 11," Mr Barilaro.