Saint Junipero Serra, pray for us! 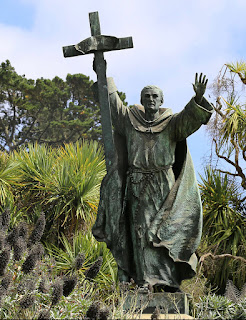 Saint Junipero founded the Catholic missions in alta California, today the state of California, bringing salvation to the natives. He defended their human rights as they were under attack by colonial forces, and, though handicapped, walked and otherwise traveled by sea 2,400 miles to Mexico City to defend them by asking that a nefarious colonial military leader be removed.

In photo: The statue of Serra that once stood in Golden Gate park in San Francisco before it was pulled down by vandals in June 2020.
Posted by MCITL at 5:48 PM