Like a New Columbus the Church Must Replant The Faith 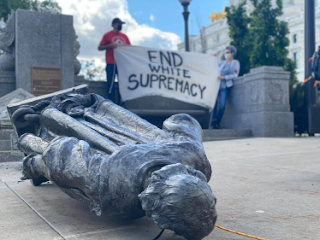 Our annual Corpus Christi procession has grown in size and grandeur in the ten years since I resurrected it. Now akin to a spiritual army in battle array, with banners flying, priest and faithful advance triumphant and victorious upon the field of engagement against an unbelieving world. This is a far cry from its dried and neglected roots after years of desuetude.

Processions, and anything beyond the mere Sunday obligation to attend Mass only, had been forgotten or relegated to the increasing number of “options” that seemed to promise a new and exhilarating freedom from obligations generally after the malaise that came with the advent of the “new and improved” Church of Vatican II.

The freedom of Christ had become confused with a supposed freedom “from” Christ. When the practice of the faith atrophies down to the mere obligatory the process is not a static one. That which does not grow withers and dies. Devotions, and even some sacraments such as Confession, began to fade into the background as vestigial memories.

A kind of spiritual materialism prevailed. The visible signs of bread in Communion and oil in Confirmation were thought to be something to “have.” This while the invisible aspect of forgiveness of sins through absolution was thought no longer necessary.