Moral Mondays: Contraception costs. And so do the side effects. 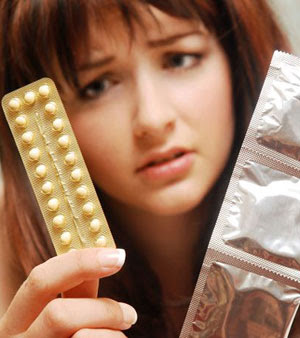 The death-dealing executive administration and their minions in Washington have been promoting their HHS mandate for weeks claiming that contraception is free. It isn't. People who use it know that. And everything you put in your body has side effects. Every medical professional knows that. What I want to know is, why hasn't anyone told Kathleen Sibelius? And who is going to pay for the medical care necessary for woman who need treatment for the side effects of contraception?

What a Woman Should Know about Birth Control

Download a printable version of this publication. You may print and distribute this freely provided that it is printed without alteration. To do so you will need to download and install the free Acrobat Reader.

All methods of birth control are efforts to separate sexual intercourse from procreation. This separation supports sexual relationships that are much weaker than traditional marriage—hooking up, cohabitation, adultery, and serial monogamy. These relationships erode society by leading to divorce, unexpected pregnancy, abortion, single parent households, abuse, and poverty. The consequences of birth control clearly demonstrate an unhealthy, anti-culture and anti-life, impact that raises major ethical concerns. Use of birth control is like intentionally eating unhealthy, nutrition-less, food just for the pleasure of eating. A steady diet will kill you. In much the same way, a steady diet of birth control kills relationships.

The birth control pill is used by over 10 million women in the US and about 4 million of those are under age 25.1 The Pill consists of a combination of two types of artificial hormones called estrogens and progestins. It works by inhibiting ovulation and sperm transport and by changing the lining of the inside of a woman’s uterus (called the endometrium) so that if the woman does conceive she may have an early abortion.

Ethical concerns: It is estimated that a sexually active woman will experience at least one very early abortion every year that she is on the Pill.2 Both pro-abortion and pro-life groups acknowledge that the Pill causes early abortions.3

Medical side effects: The birth control pill increases the risk of breast cancer by over 40% if it is taken before a woman delivers her first baby.4 This risk increases by 70% if the Pill is used for four or more years before the woman’s first child is born.5 Other side effects that women have experienced include high blood pressure, blood clots, stroke, heart attack, depression, weight gain, and migraines. Diabetics who take oral contraceptives may note increased sugar levels. Some women who stop taking the Pill do not have a return of their fertility (menstrual cycles) for a year, or even longer. Although the Pill decreases ovarian and some uterine cancers, it increases breast, liver, and cervical cancer.4 At least three studies have noted that the AIDS virus is transmitted more easily to women who are taking the Pill if their partner(s) have the HIV virus. 6 , 7 , 8

“The Shot” and Norplant

Commonly known as “the shot,” Depo-Provera, a long acting progestin hormone, is injected into a woman’s muscle every three months. It works by decreasing ovulation, by inhibiting sperm transport and by changing the lining of a woman’s uterus. Norplant is another progestin in silastic (rubber-like) tubes that are placed under her skin, and left there for up to five years.

Ethical concerns: By changing the lining of the uterus, Norplant and Depo-Provera both can cause an early abortion when conception does occur. Women who use Norplant will probably experience more than one such abortion each year since the average woman ovulates in more than 40% of her cycles while using Norplant.9 Depo-Provera may theoretically cause just as many abortions as Norplant since it is also a type of progestin.

Medical side effects: The results of two major world studies have shown that women who take Depo-Provera for two years or more before age 25 have at least a 190% increased risk of developing breast cancer.10 In addition, Depo-Provera may reduce a woman’s bone density, and worsen her cholesterol level. One study found that women who had received injectable progestins (i.e., usually Depo-Provera or norethisterone enanthate) for at least five years suffered a 430% increased risk of developing cervical cancer.11 Several studies have shown that women who receive injectable progestins have a much higher rate of contracting the AIDS virus if their partner is infected, with one study showing a 240% increased risk.12 Norplant, which was developed later than Depo-Provera, has received less scrutiny, but may carry just as high a risk as Depo-Provera. Over 50,000 women have participated in law suits against the manufacturer of Norplant, citing complaints of irregular bleeding, scarring, muscle pain, and headaches.13

The same artificial hormones used in the Pill, Depo-Provera, and Norplant are packaged in a variety of other delivery systems: the Patch, the “Morning after Pill,” the monthly injection Lunelle, hormone impregnated IUDs and vaginal inserts, and others. More are in development. Most are so new that their side effects have not been well researched. They use the same chemicals as the Pill and can be expected to have generally the same effects. All the hormonal contraceptives can also cause extended periods of unintended infertility after they are discontinued.

Barrier Methods:
The Condom and the Diaphragm

The condom has a failure rate that is estimated to be between 10-30%.14, 15 There are several reasons: breakage or slippage during use, manufacturing defects, and defects caused by shipping and storage in a hot or very cold place.

Medical side effects: The condom does not adequately stop the transmission of the AIDS virus. CM Rowland, PhD, editor of Rubber Chemistry and Technology, tells us that electron micrographs (pictures taken with a very powerful microscope) reveal voids (holes) in the condom that are up to 50 times bigger than the HIV particle.16

The diaphragm is a barrier method of birth control so it theoretically does not cause early abortion. At least one study has noted that women who use barrier methods such as the diaphragm or condom, or the withdrawal method, had a 137% increased risk of developing preeclampsia.17 Preeclampsia, a complication occurring in some pregnant women, is a syndrome of high blood pressure, fluid retention, and kidney damage, which may eventually lead to prolonged seizures and/or coma. It is theorized that exposure to the male’s sperm plays a protective role against preeclampsia.

A spermicide is an agent that is designed to kill the man’s sperm and is often sold as a gel or as an ingredient in the vaginal sponge. Toxic Shock Syndrome has been associated with the spermicide sponge.18 One researcher has noted that couples who have used certain spermicides within a month of conception have experienced a doubling in the rate of birth defects, as well as a doubling of the rate of miscarriage.19

This is a T-shaped device made of hard plastic. It may also contain copper or contraceptive hormones. A doctor inserts it into a woman’s uterus. It works by irritating the lining of the uterus and obstructing sperm transport.

Ethical concerns: When conception occurs with an IUD in place, the IUD can prevent implantation, or destroy the new embryo by copper poisoning or by attack from the body’s immune system, thus causing an early abortion.20

Medical side effects: These include uterine perforation, which may lead to a hysterectomy, and infection, such as a pelvic or tubo-ovarian abscess. Use of all IUDs has been associated with an increased incidence of PID (Pelvic Inflammatory Disease) and of ectopic pregnancy.20 An ectopic pregnancy is one in which the unborn child implants himself/ herself in a location other than in the mother’s uterus, usually in the fallopian tube. According to Rossing and Daling, two prominent researchers, women who had used an IUD for three or more years were more than twice as likely to have a tubal pregnancy as women who had never used an IUD. Among these long-term users of an IUD, risk of ectopic pregnancy remained elevated for many years after the device was removed. Ectopic pregnancy remains the leading cause of maternal death in the United States. The IUD may also cause back aches, cramping, dyspareunia (painful intercourse), dysmenorrhea (painful menstrual cycles), and infertility.

Surgical sterilization attempts to achieve permanent sterility through closing a woman’s fallopian tubes (called “tubal ligation”) or a man’s vas deferens (called “vasectomy”) by tying the tube closed and in some cases by cutting, burning, or removing part of the tube.

Medical side effects: Tubal ligation does not always prevent conception. When conception does occur, it is associated with a much higher incidence of ectopic pregnancy,22 which, as was noted, is the leading cause of death in pregnant women. In addition, women who undergo the procedure may experience complications from the anesthesia or from surgery. Complications include bladder puncture, bleeding, and even cardiac arrest after inflation of the abdomen with carbon dioxide.23 Some women who have undergone a tubal ligation experience a syndrome of intermittent vaginal bleeding associated with severe cramping pain in the lower abdomen.24 Reduced intimacy, lower libido, and a greater risk for hysterectomy often follow tubal ligation; deep regret for having been sterilized is common.

About 50% of men who undergo a vasectomy will develop anti-sperm antibodies.25 In essence, their bodies will come to recognize their own sperm as “the enemy.” This could lead to a higher incidence of autoimmune disease. Several studies have noted that men who undergo a vasectomy have a higher incidence of developing prostate cancer, especially 15-20 years after their vasectomy,26, 27, 28, 29 although one large study did not find a link.30

The best option before marriage is abstinence. The obvious benefits include greater self-respect, freedom from the risk of venereal disease, as well as monetary savings and no chance of a surprise pregnancy.

Within marriage it should be noted that an openness towards having children yields specific medical benefits. Every additional child a woman bears reduces her risk of breast cancer, some uterine cancers, and ovarian cancer.

Natural Family Planning is a totally natural method by which couples can manage their fertility. In NFP a woman determines when she is either fertile or infertile by observing the consistency of her cervical mucus. The WHO (World Health Organization) has performed several large-scale trials that have demonstrated an unintended pregnancy rate of between 0.3 and 3%, which is as good as any artificial form of birth control except sterilization. One very large trial involving about 20,000 Indian women showed an unintended pregnancy rate of less than 0.3%.32

Some obvious benefits of NFP are that it is virtually cost-free and there is no increased risk of cancer. Couples who use NFP have a divorce rate that is less than 5%33__far lower than the national rate of about 50%.

2 Kahlenborn C. “How do the pill and other contraceptives work?” Breast Cancer, Its Link to Abortion and the Birth Control Pill. Dayton, OH: One More Soul; 2000; 315-335.

4 Kahlenborn C, et al. “Oral Contraceptive Use as a Risk Factor for Premenopausal Breast Cancer: A Meta-analysis” Mayo Clinic Proceedings. 2006: 81(10):1290-1302
The study re-enforces the classification of OCs as Type 1 carcinogens by the International Agency for Cancer Research (WHO).

My personal experience: Many years ago, before I met Christ, I used an IUD as birth control. Free! No, I don't think so. I not only got a bill for the IUD, I also got cervical cancer and pregnant!! The treatments for the cancer were very costly. Not only was the financial cost high, but the cost to my body was very great. The cost to the health of my son was greatest, however, as he still suffers 30 years later from the events of that long ago period.