Benedict XVI on infertility: "procreation, consists not in a 'product', but in its connection with the conjugal act, an expression of love..." 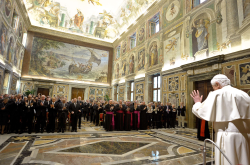 Pope Benedict said : “The human and Christian dignity of procreation, consists not in a "product", but in its connection with the conjugal act, an expression of love of the spouses, their union which is not only biological but also spiritual”.

He said: “This approach is moved not only from the desire to gift the couple a child, but to restore fertility to couple and with it all the dignity of being responsible for their own reproductive choices, to be God's collaborators in the generation of a new human being. The search for a diagnosis and therapy is scientifically the correct approach to the issue of infertility, but it must also be respectful of the integral humanity of those involved. In fact, the union of man and woman in that community of love and life that is marriage, is the only "place" worthy for the call into existence of a new human being, which is always a gift”.

But what happens when even science cannot provide the answer to a couples desire for parenthood? Here the Pope warned against what he described as “the lure of the technology of artificial insemination” where “scientism and the logic of profit seem to dominate the field of infertility and human procreation, to the point of limiting many other areas of research”.

The Holy Father noted that “So I would like to remind the couples who are experiencing the condition of infertility, that their vocation to marriage is no less because of this. Spouses, for their own baptismal and marriage vocation, are called to cooperate with God in the creation of a new humanity. The vocation to love, in fact, is a vocation to the gift of self and this is a possibility that no organic condition can prevent. There, where science has not yet found an answer, the answer that gives light comes from Christ”.

-- Pope Benedict XVI, address on Saturday, February 25, 2012, to members of the Pontifical Academy for Life.
Posted by MCITL at 2:08 PM