Bishop Morlino: ‘divide and conquer’ strategy is beginning of persecution 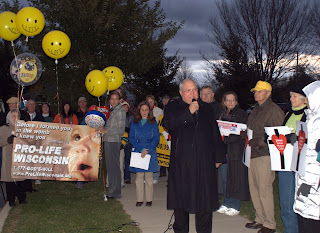 In an interview with Vatican Radio, Bishop Robert Morlino of Madison said that a “divide and conquer” strategy is being used against the Church in the public debate over religious liberty and conscience rights--a strategy that he fears marks the beginning of a “sophisticated persecution.”

“Everybody sees that their freedom of conscience is at stake,” he said. “It just depends who is up to be curtailed at any given moment for whatever reason. If they can do it to Catholics, they can do it to anybody.”

“There seems to be an approach that seeks to divide the Church, even more than she is already divided, along liberal and conservative lines. We should not be this way,” he added. “All the liberal/conservative bit is an import from the political sphere, which really does us nothing but damage.”

To take advantage of the fact that this has already happened in our culture, this division, and then to start to pit the bishops – as if they were merely one group within the Church – [against] what other groups might think, is clearly a straightforward attempt to divide and to deepen division in the Church, and to weaken the Church – the old saying, divide and conquer.

After discussing his fears that the strategy marked the beginnings of a nonviolent but sophisticated persecution, he said that organizations that call themselves Catholic must “really be Catholic” and spoke about his efforts to ensure the Catholic identity of Catholic institutions within his diocese.

Stating that there is “too much liturgical diversity“ among parishes, Bishop Morlino said that “commonality in liturgy,” assisted by the new translation of the Roman Missal, is the foundation of a robust public witness.