Putin vs. the Ukranian people. Or vs. NATO and the US?

Are we thinking like Christians and Catholics? Or rather like we’ve been brainwashed by the globo-Homo US/Soros sodomy/abortion lobby? 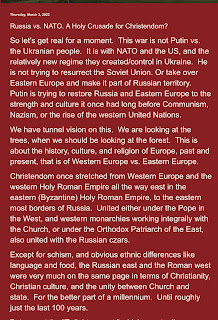 http://okietraditionalist.blogspot.com/2022/03/russia-vs-nato-holy-crusade-for.html the western Holy Roman Empire all the way east in the eastern (Byzantine) Holy Roman Empire, to the eastern most borders of Russia.  United either under the Pope in the West, and western monarchies working integrally with the Church, or under the Orthodox Patriarch of the East, also united with the Russian czars.

Posted by Father Kevin M Cusick at 7:30 AM