Our Lady’s Message at Fatima the Key to Our Time

“I shall come to ask for the Consecration of Russia to My Immaculate Heart…If people attend to My requests, Russia will be converted and the world will have peace.” 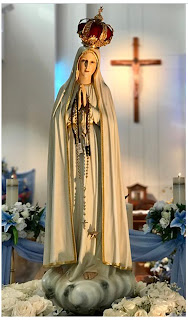 War between Russia and Ukraine brings back with renewed urgency our Lady’s unheeded messages at Fatima in 1917.

She warned that if Russia was not consecrated the world would be consumed by war and nations would be annihilated. With the threat of nuclear sabre-rattling on  the part of Russia at this time it is hard to deny the truth of Our Lady’s prophecy.

She asked the bishops to consecrate Russia to her Immaculate Heart to avert war. Though some in the Vatican have claimed over the years that the consecration was completed there are doubts. One looks in vain when one searches for evidence that all the world’ bishops prayed such a consecration together with the pope.

Ukraine’s bishops have begged the pope to pray the  consecration as our Lady requested at Fatima. Russia’s orthodox bishops have called on Putin to stop the war. These unprecedented signs also add a sense of urgency for renewing this Lent, as always, our devotion to Our Lady and to undertake the penance and prayer she says is necessary for repentance for sins in faithfulness to her Son our Savior.

The children at Fatima were shown a vision of hell, after which Our Lady told them:

“You have seen Hell — where the souls of poor sinners go. To save them God wills to establish throughout the world the devo- tion to My Immaculate Heart.

“If people will do what I tell you, many souls will be saved, and there will be peace. The war is going to end.

“But if they do not stop offending God, another and worse war will break out in the reign of Pius XI. When you see a night illu- mined by an unknown light, know that it is the great sign that God gives you, that He is going to punish the world for its crimes by means of war, hunger, persecution of the Church and of the Holy Father.

“To forestall this, I shall come to ask for the Consecration of Russia to My Immaculate Heart and the Communion of Reparation on the First Saturdays.

“If they heed My requests, Russia will be converted, and there will be peace. If not, she shall spread her errors throughout the world, promoting wars and persecutions of the Church; the good will be martyred, the Holy Father will have much to suffer, various nations will be annihilated; in the end, My Immaculate Heart shall triumph. The Holy Father will consecrate Russia to Me, which will be converted, and some time of peace will be given to the world.

“In Portugal, the dogma of the faith will always be preserved …”

Pray the rosary daily, fast and offer penance in reparation for sins against the Immaculate Heart of Mary and the Sacred Heart of Jesus.

You can read the story of the Fatima apparitions at fatima.org:

Posted by Father Kevin M Cusick at 7:24 AM