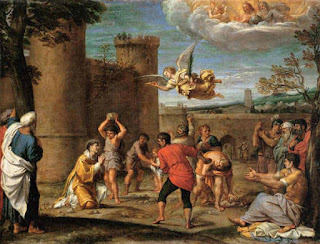 From the Sermons of St. Fulgentius, Bishop of Ruspe.

On St. StephenYesterday we were celebrating the birth in time of our Eternal King; today we celebrate the victory, through suffering, of one of His soldiers. Yesterday our King was pleased to come forth from His royal palace of the Virgin's womb, clothed in a robe of flesh, to visit the world; today His soldier, laying aside the tabernacle of the body, entereth in triumph into the heavenly palaces. The One, preserving unchanged that glory of the Godhead which He had before the world was, girded Himself with the form of a servant, and entered the arena of this world to fight sin; the other taketh off the garments of this corruptible body, and entereth into the heavenly mansions, where he will reign for ever. The One cometh down, veiled in flesh; the other goeth up, clothed in a robe of glory, red with blood.
The One cometh down amid the jubilation of angels; the other goeth up amid the stoning of the Jews. Yesterday the holy angels were singing, Glory to God in the highest; today there is joy among them, for they receive Stephen into their company. Yesterday the Lord came forth from the Virgin's womb; today His soldier is delivered from the prison of the body. Yesterday Christ was for our sakes wrapped in swaddling bands; today He girdeth Stephen with a robe of immortality. Yesterday the new-born Christ lay in a narrow manger; today Stephen entereth victorious into the boundless heavens. The Lord came down alone that He might raise many up; our King humbled Himself that He might set His soldiers in high places.
Posted by Father Kevin M Cusick at 9:49 PM