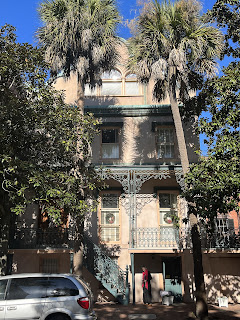 It was a chance meeting that perhaps could change a life. I wandered nonchalantly into an antiques store on a beautiful December day, my first ever in Savannah. After a post-Mass early morning bike ride to get the general lay of the metropolis, I was back out on foot, walking north from Forsyth Park toward the riverfront by means of Bull Street. It was close to noon and after checking out of my Airbnb.

One of the grand homes on one of the beautiful squares of the city shelters on its ground level a curiosity shop. Marked by the “antiques” sign, it is the kind of emporium filled with refined items that even before one enters instill confidence that there will be browsing only. This enterprise is the sort that caters to the wealthy capable of furnishing the stately urban dwellings surrounding it for miles, or the well-heeled visitor entered elsewhere upon a like mission to preserve the best arts of the past in a suitable surrounding.

I immediately encountered the proprietor, who welcomed me to browse. We began to chat and I quickly found her to be of greater interest than the beckoning displays of beautiful, glittering, and costly merchandise. We began to talk about the higher things, with both of us revealing more about our lives. She and her husband, now octogenarians, had years ago home-schooled their six children, long before it had become the common alternative it is today. He retired from his work to join her in the effort full-time.

By birth a non-Catholic, she had accepted Baptism along with one of her children early in her marriage to Michael, an Italian Catholic from New Jersey. She was motivated to convert in part because she didn’t want to be one of those “with nose pressed to the glass viewing the life from outside.” At one point she and Michael packed up about 40 pieces of luggage and took their children for an extended stay in Florence as one phase of their education.

It was for this and other reasons that what she described was the intense and fulfilling experience that only a life involving both mother and father full time can be. After the children were grown, the father asked that none of them move more distant than a couple of hours away. Today the farthest one is in Jacksonville, not far off the paternally desired brief travel time.

Posted by Father Kevin M Cusick at 7:06 AM