Catholic Herald: The New York Times Admits It Was Wrong About Pius XII

When Sister Margherita Marchione died recently, at the age of 99, the New York Times, to its credit, published a lengthy and sympathetic obituary. Less to its credit was the clumsy anti-Catholic mistake in the obituary. A mistake the newspaper then, surprisingly, corrected.

Best known for her works defending Pope Pius XII, Sr Margherita was also a gifted teacher, lecturer, literary scholar and dedicated member of her order, the Religious Teachers Filippini, which she’d entered in 1935. Her autobiography, The Fighting Nun,is a wonderful read. The American nun wrote eight books in defense of the pope, after retiring as professor of Italian language and literature at Fairleigh Dickinson University. When she died, her life and achievements were celebrated not only by the Vatican and Catholic media, but major secular outlets as well.

After noting Sr Marchione’s acclaimed academic career and prodigious research on behalf of Pius XII, the Times noted that “Yad Vashem, the memorial in Israel to victims of the Holocaust, which also recognizes those who saved Jews from genocide, has been highly critical of Pius XII.” 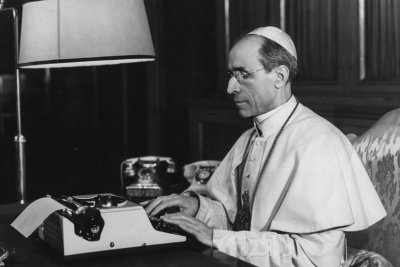 The writer reports that “In its museum, beneath a photograph of him, a statement reads: ‘Although reports about the assassination of Jews reached the Vatican, the pope did not protest either by speaking out or in writing. In December of 1942, he did not participate in the condemnation by members of the Allies regarding the killing of Jews. Even when the Jews were being deported from Rome to Auschwitz, the pope did not intervene’.”

In fact, this statement was replaced by Yad Vashem in 2012, based on better research, and in a way far more favorable to Pius XII. The revised statement highlights Pius XII’s 1942 Christmas address, which condemned mass murder based upon one’s nationality or race; notes how the pontiff appealed  to Nazi-occupied countries on behalf of persecuted Jews; and acknowledges research indicating that Pius XII’s wartime strategy “enabled a considerable number of secret rescue activities to take place.” (The old quote still appears on Wikipedia.)

The Times itself wrote about these welcome changes in its story, “Israel’s Holocaust Museum Softens its Criticism of Pope Pius XII,” published on — July 1, 2012. Do its reporters consult the newspaper’s own archives, or the notoriously unreliable Wikipedia?

The Times Corrects Itself

I immediately wrote a letter to the Times, complimenting them for devoting generous attention to Sr Marchione’s achievements, but pointing out this serious error, and requesting a correction. A day later, on June 2nd, the Times did publish a corrective.