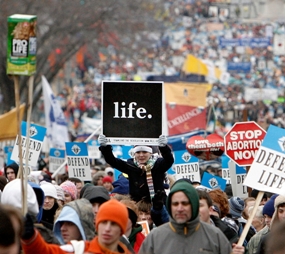 Our radio ads are running in Pennsylvania and Nebraska, while Senate Minority Leader Mitch McConnell has promised to use procedural moves to force a Senate to vote on 'repeal' of Obamacare.

This week the Catholic Health Association announced that they are now backing the Protect Life Act. The proposal is designed to 'fix' the new health care law by adding explicit prohibitions outlawing all taxpayer funding for abortion -- while adding conscience protections for doctors and health care workers.

You may be wondering why CHA would endorse this new bill given their previous claims that the health care law does not fund abortion. The legislative proposal does include new conscience protections, but still, why endorse legislation you previously argued was unnecessary?

This is where CV may surprise you.

In general when it comes to reforming health care, we agree with the CHA on very little. We fought them during the health care debate last year, and have publicly criticized them since. Even today, CHA remains convinced the law does not fund abortion (they are wrong).

But why thump our chests now that they have done the right thing?

Instead of sneering, we have a different message for the Catholic Health Association: "Whatever your motives, the members of CatholicVote are happy to have your help in getting this legislation passed. Catholics may disagree on how to best provide affordable and accessible health care, but we must be unified in protecting innocent human life!"

We are not in the business of scoring cheap political points, especially with our fellow Catholics. Our differences with the CHA remain, and we will continue to oppose their support of efforts to nationalize the financing and delivery of health care in America.

But for now we need every Catholic voter, organization, and advocacy group behind this bill. This legislation will protect taxpayers like you and me from funding abortion or insurance plans that cover abortion. The act of taking an innocent human life is bad enough. Helping fund it is simply unconscionable.

Last year we asked you to sign a petition to CHA urging them to back this new proposal. Over 93,000 CV friends signed it. And we know CHA was aware of the petition, because their lawyers contacted us about it.

The movement we are building is making a difference.