… can be found here: 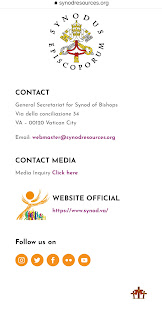 Synodresources.org is the official site for the “Synod on Synodality” currently underway at the Vatican under the initiative of Pope Francis.
All of the people behind this propaganda are promoting disunity in regard to Catholic moral teaching. All of these people attend and promote the novus ordo Mass, when they do attend Mass. The novus ordo is not, however, considered a source of disunity.
The traditional Latin Mass is attended by Catholics who give full assent of intellect and will to all that the Church teaches which is necessary for salvation in matters of faith and morals but the TLM is considered a source of disunity.
Perhaps salvation is no longer considered by some in power to be the purpose of the Church? If such is the case, that would mean those persons would no longer be in union with Jesus Christ.
Posted by Father Kevin M Cusick at 12:57 PM