There are widespread claims, promoted and fueled by the pope in Traditionis custodes, that the traditional Latin language liturgy of the Church is divisive. Where is the evidence? My parish family, with traditional Latin Mass daily, gives full assent of intellect and will to all that the Church teaches in matters of faith and morals. That sounds a lot like unity to me.

There is evidence, however, that the novus ordo Mass of Vatican II is used to divide the Church. And this thanks to no less than a leading Cardinal of the German church.

Here is Cardinal Marx, a well-known ally of the pope, promoting sodomy as a Christian good in the context of the new Mass created after Vatican II. 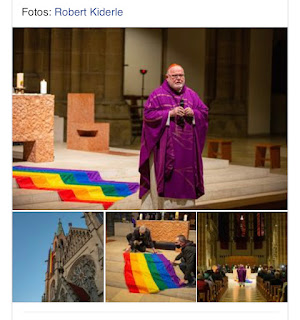 Why, you might ask, are we being gaslighted on this issue? Why is the truth denied and replaced with a lie? Usually the most obvious answer is the correct one. The traditional Latin Mass cannot be twisted to promote the godless and satanic agenda of unnatural sexual activity dear to the heart of so many bishops today.
Source: https://www.catholicnewsagency.com/news/250657/cardinal-marx-celebrates-mass-marking-20-years-of-queer-worship-and-pastoral-care

Posted by Father Kevin M Cusick at 7:38 AM