Where are the young Catholic men? At Traditional Latin Mass

Many parishes have suffered attendance implosion following suspension of Sunday obligation due to COVID and disaffection as a result of scandal. Not so for traditional Catholics, who came in large numbers for Ascension Thursday Mass for example, a solemnity moved to the following Sunday under Vatican II rules. Much has been written about the drift downward in Mass attendance among men and youth in particular since the 1970’s.

It’s not unusual to find more men than women at traditional Latin Mass, many of them young men as in this group. Most of them wore suits as they gathered as a smaller unit today for cigars after Sunday TLM and parish weekly family lunch at my church. One is a new addition this week, a local 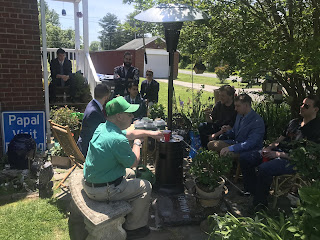 college student home on summer break who is undertaking convert instruction.
Have you been wondering where are the young Catholic men? They’re at the Traditional Latin Mass
Posted by Father Kevin M Cusick at 4:25 PM