Respectfully and with disappointment disagreeing with Patrick Coffin here.

If anything the SSPX is regularly panned for not having any lace at all on their plain surplices or other liturgical vestments. As well, they regularly wear boots or thick-soled plain footwear for holy Mass being that they must often trudge around in the mud for the fact that they regularly offer Mass in large tents because, for the most part, in many places they are effectively homeless or don’t have enough facilities to shelter all the people who come for ordinations or other large Masses.

Speak of that which you know. Otherwise take shelter in the wisdom of silence. 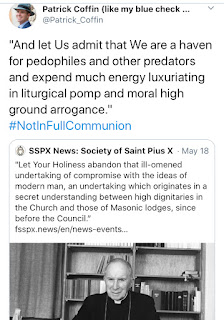 Oh, and Archbishop LeFebvre, far from being proven a conspiracy theory nutcase as you might be implying here, is a holy man who has been more than proven correct in his warnings about the errors of Vatican II and the damage to the faith and the faithful resulting, which you and many others rightly and regularly decry.

To the extent the SSPX is Catholic in the sense which the word Catholic has always meant they occupy the same moral high ground as everybody else who does the same thing.

Some years ago in Argentina Pope Francis, then-Cardinal Bergoglio, in a meeting with members of the Society declared them to be Catholic.