“I go into harm’s way to save souls”: I was denied admittance at hospital to give last rites to Catholic who requested me

The Church and her work for souls, unseen and unknown so often by so many in a world which has made God so invisible, has in some ways become more tangible in these months when so much of “normal” life has ground to a halt.
Many of our physical activities and concerns, our business and mad rushing have been forcibly taken away. The quotidian distractions have been lifted so that other concerns can come more clearly into view.

Many families have spent more time together in the last two months than they have in years. Children have been sighted outdoors, doing such things as riding bikes. This is a rare thing indeed in the computer age. 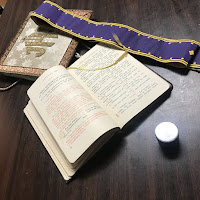 Good wishes for health have become the norm in phone conversations with strangers. Computer ordering and home delivery have replaced some of the errands we habitually did at brick and mortar businesses. Many have by necessity found new ways therefore to spend more time usefully at home.

Perhaps the lessons on marital and familial togetherness won’t be lost going forward. Families cannot grow too close. On the contrary, it’s all too often too easy for marriages to fall apart.

Although the visible Church gathered for the Sunday Mass has been subjected like so much else to the realm of the virtual during the pandemic, some aspects of her life have been brought to the fore by the same.

Those who acknowledge God in normal times of free movement outside the home by going to Mass on the Lord’s Day have for the most part, we may hope, survived its privation during plague time restrictions.

Faith is of the intentions. A desire to be physically present at the Holy Sacrifice remains whether one is able to attend or not. This is the substance of a prayer of spiritual Communion.

A world investing so much energy avoiding God because He reminds us of Heaven or Hell, and therefore also of death, has been forced all the same to confront Him through the challenge of faith or its lack. This virtue is called for in good times and in bad.

Although it is commonly thought that “there are no atheists in foxholes” this doesn’t mean we won’t still strive mightily to keep Him in a carefully sealed box when human beings themselves on the home front are thought to be vectors of disease and death.

I recently answered a call to visit a woman in the hospital who may be in her last days on Earth. She lives in our parish boundaries and had for some time been suffering the battle scars of a struggle against cancer.

A recent treatment with the incorrect chemo had sent the woman’s blood indicators plummeting, leaving her vulnerable. She had been transferred to isolation at the hospital to avoid the added danger of infection.

A family member called on her behalf after confirming the appointment with her. I reported properly masked in what has become “the uniform of the day” to the hospital on a Sunday afternoon.

After an initial request to go to her room was denied, I pressed again. The phone operator at the front desk assured me it was for my “protection” that the patient’s possibly dying request was being denied!