Less than 1% of the Japanese population are Catholic. Hence, it’s no surprise that a Latin Mass is a rare bird in Japan. Fr. Ueda, a priest from the Institute of Christ the King Sovereign Priest, says a Latin Mass once a year. Fr. Onoda from the Philippines visits once a month.

There is, however, one priest in Japan who regularly celebrates Mass in the Extraordinary Form. In the midst of the impossibly overcrowded, hectic city life of Tokyo, Fr. John A. Nariai offers the Holy Sacrifice of the Mass in a small private chapel in his personal flat.

Fr. Nariai is a retired priest of the diocese of Kagoshima in southern Japan. He first came in contact with the Latin Mass in the year 2000, because he was an active member of the pro-life movement in the U.S. He often participated in the meetings and conferences of Human Life International “and out of the blue, a priest, a Father Richard sent me a 1962 missal. That was my first contact with the Latin Mass,” Father Nariai recalls.

Father Narial fell in love with the old Rite. His Bishop refused to allow him to celebrate according to the old missal, but Fr. Nariai also refused to stop celebrating the Latin Mass. He had a long discussion with his bishop through his envoys and in the end he suggested: “What if I retire?”

The Bishop accepted and Fr. Nariai moved away to the huge metropolis of Tokyo, at the age of 67. “When in medieval Japan someone had to go into exile, it was called ‘miyako-ochi.’ I’ve done a miyako-nobori,” says Fr. Nariai proudly. “Miyako” is the Japanese word for “capital”, so, “miyako-ochi” means “kicked out of the capital,” while “miyako-nobori” means “ascending to the capital”, i.e. going to Tokyo.

Today, Father celebrates the Latin Mass every day, including Sundays, accompanied by his Japanese congregation singing Gregorian chant. Fr. Nariai’s lovely chapel is Japanese style, with shôji (japanese sliding doors) and tatami (mat made of rice straw). In a Japanese room shoes are prohibited, so the priest doesn’t wear shoes, even while celebrating Holy Mass.

(PERSONAL NOTE: For this reporter, this looked odd for a moment. But everything about the Mass was so dignified and beautiful, I began to see it as a rightly understood enculturation.)

About ten faithful regularly attend his Mass, mostly young people. It’s a small but lively and cheerful group, drinking green tea together after Mass, with inspiring conversation. When I joined with this community, I never had the feeling I was in Europe, though Catholicism in Japan is often seen as a European thing. The after-Mass socialization is not necessarily European or Japanese culture, its Catholic culture.

“I have always wanted to be different from others; that was my motivation to enter the seminary. Now I’m again different from all the other priests in Japan,” Fr. Nariai explains. “But in fact, I don’t want to be different. I want every priest to discover the treasures of the Latin Mass.”

Despite his 78 years, he is very communicative and active and loves to come into contact with other priests and the faithful. He can be contacted on his web-site, too, at http://www.geocities.jp/fr_nariai/

For me, his Mass has been a great experience in Catholic culture. In Japan, I can actually feel that the Church is Catholic in the sense of “universal.”

Latin is the Church’s language; it connects people around the world. This Holy Rite of the Mass makes me feel at home, even in a very un-Christian culture like Japan.

Finally, the Mass provides a foretaste of the Glory yet to come. 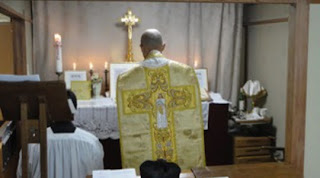