From The Windsor Star


He was a soldier to the end. His threadbare army tunic hung on the wall, and his room was filled with religious icons, rosaries and holy pictures. And when you spoke to him, his words were about the men he knew on the battlefields of France when he rigged up a makeshift altar on the hood of his jeep and said mass for them.

The photos from the Second World War show these anxious men kneeling, their heads bowed, silent in the muddy fields just hours before they were sent into battle. And when age finally wore him down -- long after the war and years of serving parishes all over the London diocese including Windsor, Woodslee and Kingsville -- this old priest told me it wouldn't stop him from saying mass in his bed at the nursing home. It would never stop him from being a priest. And there was no way he would ever lose his faith in his religion or people. I'm speaking about an old friend, Rev. Mike Dalton, who passed away Monday afternoon at Sacred Heart Nursing Home in Courtland, Ont. He was 106, a month shy of his 107th birthday.

This son of a Goderich farmer is the most decorated padre who ever served in the Canadian Army. He marched at the front lines with his fellow soldiers, often carrying their weapons when they tired of battle. Besides the Military Cross for bravery, Father Dalton was the first Catholic priest to receive the Member of the British Empire. The day King George VI pinned the decoration on his tunic at Buckingham Palace, he dug deep into his pockets and handed the monarch a Catholic religious medal.

When I met Father Dalton in the mid-1990s, this legendary padre with the Essex Scottish, who landed at Normandy in 1944, complained of sitting in a wheelchair. His legs had given out on him. He prayed for God to give him back his strength, so he could stand up again and say mass. TWINKLE IN HIS EYES. Deep down, he knew better. He told me so.

The day I met him, Father Dalton wore the Roman collar, and had a twinkle in those slate-grey eyes and a wit and a humour that bubbled out in the stories he spun for me. He loved to talk. He loved people. He loved life. He loved God. He loved being a soldier. He loved being a priest. If there was anything he didn't like, it was losing those fathers and sons to war. He had sensed their inner fears. It didn't matter if the orders were to stay clear of the front lines -- he listened instead to his own heart, and drove his jeep to the brink of battle. And he would sit there in the open jeep -- its windshield festooned with flowers -- and hear the laboured, disturbed confessions of terrified soldiers. Or sometimes he would join a soldier on a road to a battle and try to ease their woes and lift their spirits. 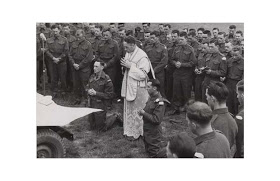 Somehow Father Dalton believed he was invincible. He said he feared nothing. He figured he had a purpose, a reason to be. He felt lucky. He felt destined and blessed for some higher purpose. How else, he asked, do you explain how twice his truck was hit with shrapnel, and men died all around him? "I didn't have a scratch. I couldn't even get a cold," he said.

And sometimes he was so lost in the reverie of saying mass on the hood of his jeep that he would suddenly turn to give a blessing, "and there was no one there ... I was all alone. The soldiers had jumped for cover, and shrapnel was flying everywhere. I hadn't heard a thing."
Rev. Matthew George, a longtime friend of Father Dalton, in hearing of his death, said the biggest regret of this priest's life was discovering too late the botched Dieppe invasion. "He had been at a chaplain's meeting and when he found out, he wanted to be put ashore, but they wouldn't let him. "He cared about those men -- and never forgot them," said George.
It reminded me of what Dalton told me years ago when I asked why he joined the army. He said that when he served at St. Alphonsus in downtown Windsor, he realized those same kids who had made their First Communion in that church were now running off to war.
"I had to go with them," he said.

Now with his passing, I'm speculating the old padre is catching up to them, once again.