On denial of Communion at Mass: "Sinners can cause scandal certainly; so also can zealous saints." 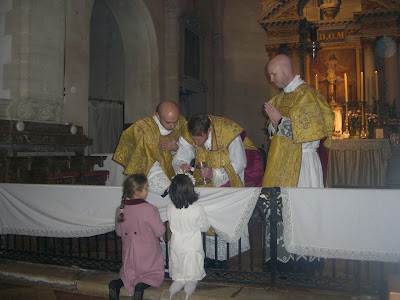 Scandal and the Denial Of Communion

Sinners can cause scandal certainly; so also can zealous saints.

A recent case in the Washington, D. C., area ap­pears to have been a setup. Allegedly a woman ap­proached a priest in the sacristy prior to her moth­er’s funeral Mass and announced that she was liv­ing in an immoral sexual relationship. The priest subsequently denied her Communion during the celebration of the Mass.

Whether the woman had bad will or not, she was able to twist the case into a scandal against the Church by causing an internal conflict within the well- meaning priest whose reaction to the dilem­ma brought into the public light a fact of personal sin which may very well have been, and would otherwise have remained, private.

Should an individual use a parent’s funeral Mass and the Sacrament of the Holy Eucharist to make a statement? No. Should a priest deny Holy Com­munion to someone who he has virtually certain knowledge should not be receiving the sacrament? It depends: Only if the act of withholding the sac­rament will itself not be a source of scandal. In some cases it very well could be and therefore Communion should be given to those who other­wise properly present themselves.

What is scandal? “ Scandal is a grave offense when by deed or omission it deliberately leads oth­ers to sin gravely” ( Catechism of the Catholic Church, n. 2326)

In the matter of the reception of Holy Commun­ion or the distribution of Holy Communion, can­on 915 is usually cited as the Church’s definitive statement as to when the minister of Holy Com­munion, usually a priest or deacon, is instructed to deny Holy Communion to someone who pre­sents himself or herself during the Communion procession of Mass. In his document The Disci­pline Regarding the Denial of Holy Communion to Those Obstinately Persevering in Manifest Grave Sin, Raymond Cardinal Burke delves into this issue, which can so often be a source of con­fusion.

Cardinal Burke clarifies thus: “ The denial of Holy Communion can be the effect of the imposi­tion or declaration of the canonical penalties of Excommunication and Interdict ( cf. canons 1331 § 1, 2; and 1332), but there are other cases in which Holy Communion must be denied, apart from any imposition or declaration of a canonical penalty, in order to respect the holiness of the sacrament, to safeguard the salvation of the soul of the party presenting himself to receive Holy Communion, and to avoid scandal.”

Certainly two of the conditions which Cardinal Burke cites, respecting the holiness of the sacra­ment and safeguarding the soul of the party pre­senting himself, apply here. Whether or not the third condition, “ and to avoid scandal,” applies in the case of the woman at her mother’s funeral Mass is doubtful. This is where the well- meaning priest may have gone astray, which event was then used to cause a scandal against the Church.

The act of receiving Holy Communion can therefore be a source of scandal but so also can refusal to give the Lord to one who requests the Sacrament.

The Holy Mass is essentially a public event dur­ing which it is virtually impossible for the priest to have a private conference with a person when he presents himself for Communion without risk of causing a scandal thereby. Unless the priest has sufficient certainty that his action of giving the Eucharist to a particular person at Mass will itself be a source of scandal, as in the case of Nancy Pelosi or Kathleen Sebelius and other public figures, he must give the Eucharist with the generous love of Jesus Christ who is truly Present in the sacrament and who is the Savior of the world.

There very well may be an element of surprise for the priest when certain individuals present themselves in the Communion line. And there cer­tainly are individuals who use the Lord to make a statement. For these and more reasons it is certainly would be a good habit for the priest to simply ask, when conditions make it appropriate or when non­-confessional private information has created uncertainty as to a person’s understanding of the Eu­charist or lack of proper disposition for reception: “ Are you a Catholic?” If the person says “ Yes,” thereby making a putative statement of faith, the priest can proceed in good conscience to give the sacrament. If the person says “ no” the priest can offer to give the individual a blessing.

It is also a matter of settled policy in many dioceses for the priest, at a funeral or wedding Mass, to make a general statement prior to Communion that only those Catholics present who are properly disposed should come forward. Causing confusion in this matter has been the mania in recent years to in some cases invite everyone forward, even those who cannot communicate, instructing them to fold their arms to indicate they are unable to receive.

Communion kneeling at the rail and on the tongue is not a freakish, fringe practice as so many Catholics of a certain stripe have so successfully characterized this universal ordinary means of receiving Communion. The Pope does it. And the Holy Father by his consistent example is calling for the return of this beautiful custom which enables the faithful to express their faith in Christ's real Eucharistic presence simply and profoundly at the moment when it is most significant: upon receiving Him Body, Blood, Soul and Divinity in the Eucharist. And this practice also very effectively filters out those who do not intend to receive the Lord with Catholic Faith.

Jesus Christ, who is truly present in the Eucha­rist and who desires that "all be saved and come to the knowledge of the truth" through, with and in Him, should be defended by all who love Him that He may never be exploited for sinful or scandal­ous purposes. This includes those who wish to twist denial of the Holy Eucharist into a means of scandalizing others against His Church through which He continues to act as the Savior of the world.

+ + + ( Visit Meeting Christ in the Liturgy at mcitl. blogspot. com for teachings from the Cate­chism of the Catholic Church paired with the Scriptures of holy Mass for every day of the week. Fr. Cusick blogs at APriestLife.blogspot. com and you can e- mail him at mcitl.blogspot. com@gmail.com.)


Powered by TECNAVIA
All contents © Copyright 2012 The Wanderer Press
Posted by MCITL at 3:01 AM

Father, thank you for posting this clarification. I like the photo. It appears to be in either a Lutheran or Anglican Church. I wish it were from a garden variety Catholic parish alas the communion rail was long ago removed in most places. I pray that this be remedied and restored soon. I firmly believe a large part of the problem today is very few (too few) Catholics actually know what they are doing when they approach the holy of holies. reverence, recollection, authentic piety and devotion seem to be all too rare the past 40 years.