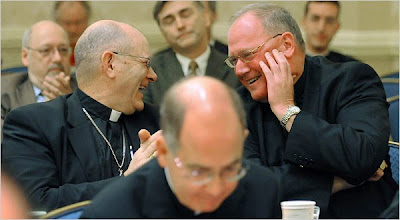 A surprise for who?

This is a vote for a more ebullient, self-confident orthodoxy. The bishops bypassed their longstanding custom of automatically promoting the vice president. This is a seismic shift for the Church in the USA, the dawning of a new day.

Archbishop Timothy M. Dolan of New York was elected president
of the United States Conference of Catholic Bishops at a
meeting in Baltimore on Tuesday, defeating the conference's
sitting vice president, Gerlad Kicanas of Tucson. It was the
first time since the 1960s that a vice president was on the
ballot for president and lost, the Associated Press reported.
Archbishop Dolan, who was notably omitted from a list of
newly elevated cardinals last month, won 54 percent of the
vote to 46 percent for Bishop Kicanas in the third round of
voting.