Benedict Sunday Morning: “Let us walk in the light of the Lord!” Silence is not an emptiness when in it the Word of Light is received with love 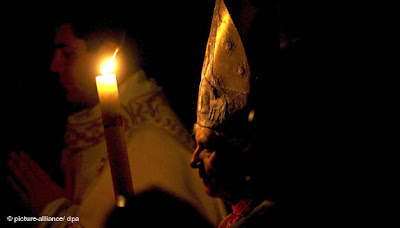 With the publication of his new book, The Light of the World, Pope Benedict’s openness and willingness to engage the world in order to bring the light of Christ to others has once again ignited a controversy. His words about the hypothetical use of condoms by a male prostitute with AIDS for the sake of saving the life of another were quickly twisted to give the impression that the Church is now doing an about face in regard to its long-standing teaching that every use of artificial contraceptive is a moral evil. What in fact he was saying was obscured mainly due to the fact that all of the static erupted before the book was officially released. We ended up once again, as a result, in a propaganda tsunami and not with a dialogue because Benedict could not yet speak for himself if the vast multitude were not yet able to read the book for themselves.

For the full text of homily for the First Sunday of Advent visit Meeting Christ in the Liturgy.
Posted by Father Kevin M Cusick at 8:23 AM