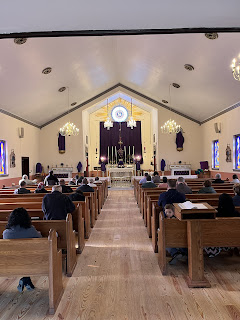 Just as with great anticipation the Church in Lent awaits the new life of the Lord’s Resurrection, so our little church in Benedict, Md., awaits at the same time the great unveiling of the final details of our extensive years-long renovation — “reno” — and redesign project.

Renovation of course means “to make new again.” What will be revealed — beginning on Palm Sunday with the hanging of our lamps and chandeliers and then fully exposed at Easter with the lowering of a great canvas and scaffold to reveal a monumental apse mural — is new in one aspect. The work, materials, persons, and energies involved may be new, but the inspiration is old.

Classic church decoration and architectural traditions have inspired our church’s return to its roots since the beginning of my work as pastor here in 2010.

Our first task involved removing a wood backdrop placed in the 1980s between the antique marble altar and the apse wall. It had become darkened after a fire in the church in 2010. It was removed and the apse wall restored in places where wainscoting and plaster had been ripped out. The wall was adorned with a pediment element of classic rectangle molding surmounted by a triangle. A brass crucifix which originally hung in a Jesuit chapel at Woodstock, Md., replaced a wooden “resurrectifix” in the central location over the altar.

A carrara marble floor was then installed in the sanctuary to replace the blue wall-to-wall carpeting and to match the marble of the altar and extant altar rail.

These improvements remained for a few years as the sole attempts to return the church to its 1924 roots. Later the central molding pediment was painted “de Sales blue,” after the distinctive hue of the habit typical of portraits of our patron St. Francis de Sales. A Holy Spirit dove with gold rays was hung in the surmounting triangle.

As new families joined the parish, attracted to our full weekly schedule of Traditional Masses, sacraments, and devotions, with them came new inspiration to more fully embrace our Catholic roots. Parishioners designed, built, painted, and installed a gradine behind the altar to hold the candlesticks, flower vases, and reliquaries that were filling out our growing collection of traditional adornments.

Years ago, the side altars under our statues of the Sacred Heart and our Lady had disappeared. This no doubt was a result of the fad in the 60s to have only one Mass with numerous celebrants. We wished to restore the teaching of the importance of every Mass offered by every priest daily. Nothing emphasizes the importance of each Mass and the necessity of having more Masses offered than the side altars of every church.

A Mennonite cabinetmaker was commissioned to build our side altars which were then both installed with predellas and marbleized by parishioners. The altars were designed with open fronts so that, through a door on their sides, the liturgical colors of their frontals can be more easily changed with the various colors of cloth on backings.
Gates for our altar rail were found in a church goods warehouse in Pennsylvania where a metal worker restored them and fabricated new hardware to mount them. Our altar rail opening had been widened in the 1980s by cutting off portions and remounting the end pieces at the cuts. We corrected this by having a stone company come in and move the altar rails back toward the center, leaving the proper gap needed for the refurbished gates. These were then installed and anchored by a parishioner.

During the COVID 19 scare we confirmed the century-old ceiling of our church was in a state of near collapse. We called in a plaster renovation firm from New Jersey to begin the nearly quarter-million-dollar project which would shore up and restore the ceiling and walls, replace compromised sections of plaster, and paint the entire interior of the church.

We also took advantage of this work to remove all the pews, rip out the carpeting, and replace it with an eight-inch pine plank floor treated four times with tung oil. We hung four new brass chandeliers in the main church. All of the other lighting, to include fluorescent, was replaced with used vintage fixtures.

The ceiling and two saint inserts above the side altars were painted a very light celestial blue. Details were gilt with metallic gold. The wainscoting of the main church walls a terra cotta. Details such as window frames and sills and molding on the walls and ceiling vent surrounds was painted a dark gray. A rich brown was used for door frames and floor molding. The industrial ceiling vents were covered with decorative screens painted gold and floor vents with decorative brass covers.

A crucifix and Holy Face shrine with a place to kneel for prayer was added to the church near the main front doors. The cry room/confessional/baptistry was painted with a yellow wainscoting and green on the pine floor. Plans call for a real wood confessional to replace our current screen and chair.

Among our new parishioners, I noted that one was an experienced painter. A former Naval aviator, Bob had attended art school and hung out his shingle as a painter of military aircraft. He had been commissioned by George Bush to paint the aircraft carrier named for the president. After noting his artistic abilities, yet with some doubt as to their adaptability to church decoration, I encouraged our designer to contact him and begin discussions.

The two started conferring and agreed to an initial project of trompe l’oeil door lintel murals over the server and priest sacristy doors in our sanctuary. Bob quickly gained expertise in the method and completed the faux “carvings” with roundels depicting St. John Vianney, patron of parish priests over the entrance to the sacerdotal sacristy, and St. Tarcisius, an excellent model for servers, over the door which the acolytes enter to prepare for Mass.

Plans for painting a monumental mural on our apse wall then proceeded, commencing this Lent with construction of a scaffold to support the artist and a canvas to conceal its genesis. The mural is topped by golden rays and clouds “emitted” by the antique window of the Lamb on the book with seven seals. Below that St. Francis de Sales ascends in glory among the rays and clouds supported by two angels.

The mural surrounds the central classical pediment with Baroque columns topped by carved cherubs. The project will continue after Easter with further painting of “sculpted” saints framing the altar and Renaissance style “curtains” on rods around the base of the walls as seen at sites like the Sistine chapel.

Through the generosity of a benefactor, we have acquired two matching Waterford chandeliers and two brass hanging candle lamps to match our central tabernacle lamp. These additional four lamps will be hung to frame the tabernacle lamp in time for Palm Sunday.
At the Easter vigil, with the chanting of the Gloria and the triumphal organ music, we will lower a great violet veil which covers the sanctuary wall, to reveal the beautiful new apse mural. We hope you can join us in spirit, if not in person, as we experience the true joy of total commitment to every aspect of our ageless eternal traditional Catholic faith in a time of betrayal, confusion, and malaise in many areas of ecclesial life.

A blessed Holy Week and a most joy-filled Easter to you and to our families. Surrexit Dominus vere, Alleluia! Praised be Jesus Christ, risen Lord, now and forever.

Visit apriestife.blogspot.com for photos and stories about our church renovation, Catholic news and views and more.

The columns are published weekly at thewandererpress.com