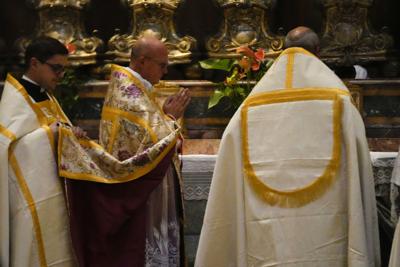 ROME (AP) — Traditionalist Catholics descended on Rome on Friday for their annual pilgrimage, hoping to show the vibrancy of their community after Pope Francis issued a crackdown on the spread of the old Latin Mass that many took as an attack on them and the ancient rite.

An evening vespers service at Rome’s Pantheon basilica, the first event of the three-day pilgrimage, was so full that ushers had to add two rows of chairs to accommodate the faithful. Many young families, couples and priests filled the pews, hailing from the U.S., France, Spain and beyond.

One of the Vatican’s “ceremoniere,” or official priests, Monsignor Marco Agostini, celebrated the evening service, which featured Latin chants, incense and brocaded vestments with the priests facing the altar rather than the pews. Many women wore lace veils, or mantillas. Many priests eschewed face masks.

“We want to demonstrate our attachment to the Successor of St. Peter and that we are in the heart of the church,” said Pedro d’Aquino, who travelled from Brooklyn, New York, for the pilgrimage. “We’re not interested in ideology or polemics.”

Francis in July reimposed restrictions on celebrating the old Latin Mass that Pope Benedict XVI had relaxed in 2007. Francis said he was reversing his predecessor because Benedict’s reform had become a source of division in the church and been exploited by Catholics opposed to the Second Vatican Council, the 1960s meetings that modernized the church and its liturgy.

The move riled Francis’ conservative critics, many of whom have gone so far to accuse him of heresy and watering down Catholic doctrine with his focus on the environment, social justice and migrants. Francis says he preaches the Gospel and what Jesus taught.