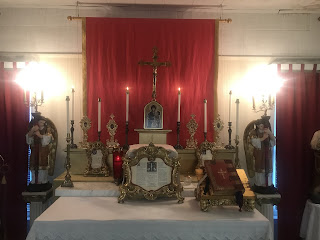 In the time of Pope Liberius, there lived at Rome a certain nobleman named John and a noble lady his wife, who had no children to whom to leave their substance. Then they vowed that they would make the most holy Virgin Mother of God their heiress, and earnestly besought her in some way to make known to them upon what godly work she would that the money should be spent. The Blessed Virgin Mary graciously listened to their prayers and heart-felt earnestness, and by a miracle assured them of her will.
On the 5th day of August, which is that time when the heat of summer waxeth greatest in Rome, a part of the Esquiline Hill was covered by night with snow. And on this same night the Mother of God appeared in a dream to John and his wife separately, and told them that on that spot, which in the morning they should see clad with snow, they should build a Church, to be dedicated in the name of the Virgin Mary, for that this was the way in which she chose that they should make her their heiress. John went and told it to Pope Liberius, who declared that he also had been visited by a like dream.
Therefore he came in a solemn procession of Priests and people to the snow-clad hill, and traced upon that spot the plan of a Church which was built with the money of John and his wife. It was afterwards rebuilt by Sixtus III. At the beginning it was called by diverse names, sometimes the Liberian Basilica, sometimes the Church of St. Mary-at-the-Manger. Howbeit, since there are in Rome many Churches called after the Holy Virgin Mary, and this Church doth excel them all, both in honour, and because of the strange sign wherewith it was dedicated, it hath come to be called the Church of St. Mary, the Greater. The memory of the dedication thereof is kept every year by a Feast-day that taketh name from the wonderful fall of snow which on this day took place. (Breviarium Romanum) 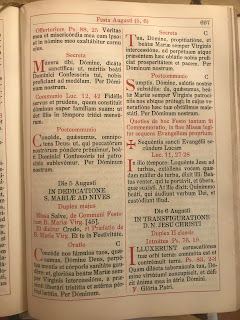 “Salus populo Romani”, health of the Roman people, is the ancient and sacred icon image of Our Lady enshrined at the church of Santa Maria Maggiore.