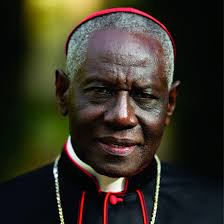 Cardinal Sarah, pictured above, recently spoke out on attempts to quash the TLM as “clericalism”.

“History will remember Benedict XVI as a great theologian and as the Pope of Summorum Pontificum, Cardinal Robert Sarah told IlTimone.it (July 2).

“He believes that with the Motu Proprio Summorum Pontificum began “a path of liturgical and spiritual REFORM" which in spite of difficulties, and resistances is ‘irreversible.’”

He also spoke compellingly on the vocation of priesthood:

“The priest has the care of souls,” Sarah stated firmly.“If he does not care about souls, he becomes useless. This means, for a priest, to take care of others, to be a ‘curate’ [curato, curé], like St. John Vianney.”Regarding the crisis, the cardinal stated that everything “bearing in itself the clear signs of stability, immutability, and eternity” in our society — including both the priesthood and marriage — is in crisis. Sarah explained that because the “man of today” lives on sensations, emotional impulses and material things, he thinks a life dedicated to spiritual and supernatural values seems “impossible or absurd.”“The priestly life falls victim to this crisis of modernity,” Sarah said.“The priestly vocation is always born in the context of the faith in the man’s life and community, be it the family or the parish,” he continued.“Without faith in God, he would not understand the reason to give his whole life for Christ, for the Church, and for souls, always. For many men today, the priesthood is … a useless life except and only when it concerns itself with the material needs of others.”

Posted by Father Kevin M Cusick at 7:28 AM