LOURDES AND THE INTERNATIONAL MILITARY PILGRIMAGE 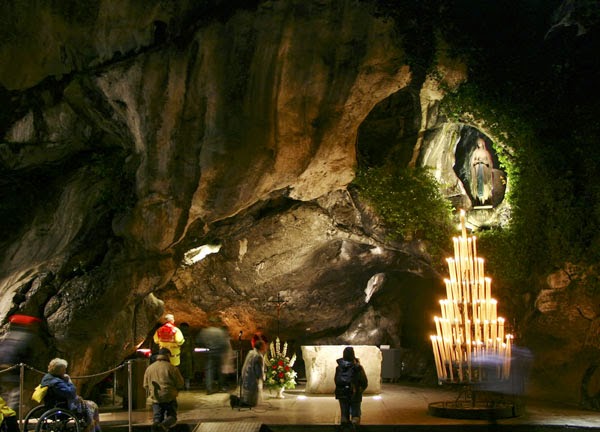 The history of Christian pilgrimages to Lourdes began with Bernadette Soubirous, who was born at the Boly Mill in Lourdes to François Soubirous and Louise Castérot on 7 January 1844. The eldest of nine children, Bernadette lived at the mill with her siblings and parents for ten years. After facing dire financial circumstances, the family moved to an unused prison, known as the Cachot, where they lived in considerable poverty.

On 11 February 1858, 14-year-old Bernadette was sent to collect firewood at the nearby river, Gave de Pau. Noticing a strange wind, she looked up from the riverbank and saw a beautiful lady dressed in white appearing in a hollow of a rocky cave. Bernadette received 18 such visions of this woman in white, who eventually identified herself as the Immaculate Conception, a Marian title solemnized less than five years earlier by Pope Pius IX. During the apparitions, Our Lady shared with Bernadette the message of the importance of faith, prayer and repentance. She guided Bernadette to uncover an underground stream, whose waters have long been a source of spiritual and physical healing to pilgrims throughout the world.

In 1866, Bernadette entered the Convent of the Sisters of Charity in Nevers, where she died on 16 April 1879, at the age of 35. Recognized for her humble simplicity and devout faith, Bernadette was declared a saint of the Church by Pope Pius XI on 8 December 1933.

Responding to Our Lady’s call for prayer and repentance, pilgrims — including members of the armed forces — have flocked to Lourdes for more than 150 years. During the Second World War, members of the French military visited the site of St. Bernadette’s apparitions, where they offered prayers for peace. On 10 December 1944, U.S. military personnel joined British, Belgian, French and Russian military representatives for a Mass at the Basilica of Our Lady of the Rosary, which had been built in 1901 to accommodate the large number of worshipers visiting the apparition site.

In 1947, a German military chaplain — who had been held as a prisoner of war in France since 1944 — was invited to participate in a military pilgrimage held in September that year. By the next year, German and Belgian soldiers began participating in larger numbers, followed by soldiers from many other countries.

In 1958, the year of the 100th anniversary of the apparitions, the first official International Military Pilgrimage (Pèlerinage Militaire International or PMI) took place. In 2014, Bishop Luc Ravel of the Diocese of the French Armed Forces presided over the pilgrimage, welcoming military chaplains, service men and service women from various delegations throughout the world. This year’s pilgrimage, which marks the 57th anniversary of the PMI, focuses on the theme “I Am My Brother’s Keeper.”
Posted by MCITL at 5:19 PM