Letter from Cardinal Donald Wuerl: "There can no longer be any doubt that religious liberty in our country is in jeopardy." 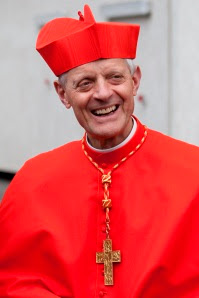 On January 20, 2012, the United States Department of Health and Human Services with the approval of President Barack Obama issued a new federal mandate making coverage of abortifacient drugs, sterilization and all FDA-approved contraceptives obligatory for virtually all employers, including faith-based institutions. What is at the center of the concern of Catholic bishops and others about this action by the Obama administration? How can it affect the institutions of the Archdiocese of Washington?

The new mandate is the first federal regulation in our nation’s history to require all faith-based institutions to pay for coverage of abortifacient drugs, sterilization and contraceptives. People were already free to use such widely available products and procedures. Up until this mandate, employers could choose whether or not to cover them and individuals could choose whether or not to seek employers that pay for them. Now nearly all those who provide insurance must include abortifacients, sterilization and contraceptives. Virtually all Catholic institutions and individuals will have to pay for that coverage. Being forced to provide these services violates both our faith conviction and our freedom.

In upholding the HHS regulation, the administration has ignored the First Amendment to the Constitution of the United States and has denied Catholics the most fundamental freedom, religious liberty. Despite the Church’s appeal for a broader religious exemption, which was echoed by many other faiths, the administration refused to modify the regulation’s current exemption that is limited to religious groups that hire and serve people primarily of their own faith. Most churches and church-run institutions do not qualify for the exemptionbecause of their very openness to serving the common good of society and all people regardless of creed.

Even those who may disagree with the Church’s teaching on the sanctity of human life, such as the editorial boards of The Washington Post and the New York Daily News, have stated that the government has no business forcing religious institutions to sponsor and pay for procedures and drugs which violate their beliefs.

What will happen if this mandate stands? Our schools, hospitals and charitable organizations will be placed in the untenable position of choosing between violating civil law and abandoning our religious beliefs.

For example, the mandate will allow a Catholic school one of three options: 1) violate its beliefs by providing coverage for medications and procedures we believe are immoral, 2) cease providing insurance coverage for all of its employees and face ongoing and ultimately ruinous fines, or 3) attempt to qualify for the exemption by hiring and serving only Catholics.

A Catholic school simply cannot effectively teach Catholic doctrine while providing insurance to its teachers – and in the case of Catholic universities, to its students as well – that violates its own beliefs. Nor should it have to deny its employees access to affordable health care, a basic human right. Nor could it afford to pay crippling fines. Nor should it be forced to close its doors to non-Catholics.

There can no longer be any doubt that religious liberty in our country is in jeopardy. Only weeks ago, the Obama administration unsuccessfully argued to the Supreme Court that the government has the right to interfere in a church’s choice of its ministers. Thankfully, the Court unanimously rejected this radical position. Undeterred, the government has advanced on another front.

Catholics across America are already fighting this mandate. Catholic journalists of all backgrounds have widely criticized the HHS rules as unjust, and leaders of major Catholic organizations — such as the Catholic Health Association, Catholic Relief Services, andCatholic Charities USA — have also spoken out against them. In the meantime, the Bishops’ Ad Hoc Committee for Religious Liberty is actively exploring options for litigation and legislative proposals to remedy this injustice.

I hope you will bring this information to the attention of your parishioners and encourage them to pray that justice will prevail and religious liberty may be restored. You may wish to include a bulletin announcement or information on your parish website recommending that parishioners visit http://www.usccb.org/issues-and-action/religious-liberty/conscience protection/index.cfm and http://capwiz.com/mdcath/home/ for details about the new federal mandate and how to contact Congress to support legislation that would reverse the administration’s decision. Please consider calling attention to this issue and all of these resources as soon as possible.

With gratitude for your collaboration in this very important matter and with every good wish, I am

Archbishop of Washington
Posted by MCITL at 5:21 PM