Asia Bibi: Catholic in Pakistan condemned to death by the "religion of peace" 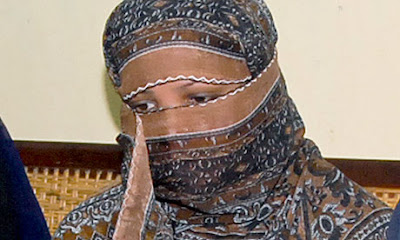 The tension surrounding the plight of jailed Christian Asia (also spelled "Aasia") Bibi is increasing as members of the Pakistani Jamiat Ulema-e Party and the Taliban call for her death.

Though Pakistan’s Federal Minister for Minorities Affairs, Shahbaz Bhatti, believes Bibi is innocent, members of the Jamiat Ulema-e-Pakistan have marched in protest chanting, "Asia, the blasphemer: hang her, hang her."

A cleric has already offered 500,000 rupees – roughly $5,800 – to anyone who kills the Pakistani mother and step-mother of five. And in yet another sign that the case has become a rallying point for extremists, the Taliban also has threatened retribution should she be spared.

As tensions mount, Pope Benedict XVI and Ronald S. Lauder of the World Jewish Congress have both expressed concern and distress over Bibi, a Roman Catholic, and the persecution of Christians in other countries.

In a Dec. 10 meeting at the Vatican, Lauder, president of the leading global Jewish advocacy group, noted with concern that both Christians and Jews in the Middle East are facing the threat of radical Islam. He also expressed his sympathies over the murder of Christian leaders in Iraq and Turkey.

The pope has called on Pakistani officials for Bibi’s release. Prior to that, he denounced the Oct. 30 Baghdad church attack that killed nearly 60 worshippers and priests last month as “absurd.” The U.S. Conference of Catholic Bishops has also called on Congress to issue a resolution calling for a comprehensive plan to improve security for Iraq’s religious minorities.

In return, the pontiff conveyed the importance of Jews and Catholics working together to fight anti-Semitism even as it is directed at Christianity. Pope Benedict indicated that Jews and Christians needed one another, and that the bonds of brotherhood and goodwill between the religions should continue to be strengthened.

The pope also emphasized the need to continue to combat "unacceptable" anti-Semitism in the Christian world, which was the chief subject of the recent talks. At the meeting, the WJC delegation spoke of efforts to downplay Jews’ connection to its holy sites as a new “politically correct" form of anti-Semitism.

Lauder asked the pope to speak out against the de-legitimization of Israel and the denial of Jewish and Christian holy sites such as the Western Wall and the Tomb of Rachel near Bethlehem.

Pope Benedict responded, saying that the Christian church recognized the historical connection of the Jewish people to their ancient homeland Jerusalem, which goes back to the time of Abraham. He expressed his commitment to help foster understanding of the bond between the nation of Israel and the land of Israel among people throughout the world.

As for Bibi, the first woman be sentenced to death for blasphemy, she continues to sit in prison. Her husband, Ashiq Masih, recently told National Public Radio that he fears she may be killed in jail. He and their children also fear for their lives and have gone into hiding.